LEGALISED PERSECUTION IN PAKISTAN AND ITS REPERCUSSIONS

Within a month of losing the bid to be re-elected to the UN Human Rights Council, Pakistan has proved the point, when angry mobs went on to torch a factory belonging to an Ahmadi Muslim and an Ahmadi mosque in Jhelum, Pakistan. Neither any national nor provincial Government agency was willing to act swiftly enough to protect the properties. On the contrary, the complex was burnt and an Ahmadi mosque was occupied by extremists. More than 200 Ahmadis had to flee from their homes in fear of their lives.

This attack did not come as a surprise, because it is not the first time that baseless accusations have been conjured up against Ahmadis who have been victims of extremist clerics citing trumped up charges of blasphemy against the Holy Qur’an. As a result, mobs have been incited and let loose to vandalise Ahmadiyya mosques, set fire to the houses and businesses of Ahmadis and caused the injury and death of numerous innocent Ahmadis.

I too have seen such horror first hand and I remember it as vividly today as when it unfolded more than 26 years ago. On 9th April 1989, there were riots against Ahmadis in my hometown of Nankana Sahib, Pakistan. These were instigated by announcements from loudspeakers that a copy of the Holy Qur’an had been burnt in an Ahmadiyya mosque. A few days later, on April 12, all the houses of Ahmadis were looted, demolished or burnt. The attackers did not even spare the Ahmadiyya mosque from their acts of vandalism. The irony was that in setting fire to the homes and the mosque, the mob even succeeded in burning several copies of the Holy Qur’an (some of which had been published by printers approved by the Government of Pakistan!) – the very crime which they were deceived into believing had been committed by the Ahmadis and the reason for savagely attacking them. 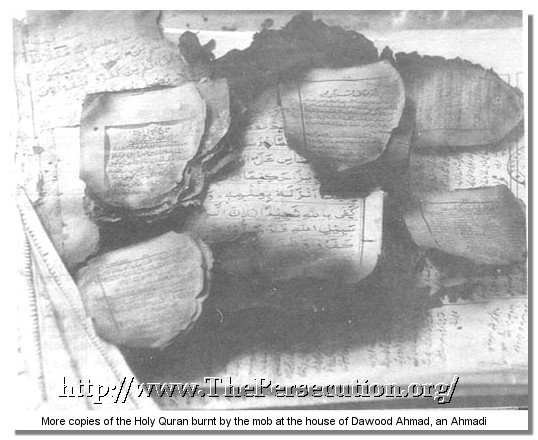 The impact of such persecution on the daily life of Ahmadi Muslims in Pakistan is difficult to imagine, for it is nothing short of a daily struggle for security and safety. Twenty-six years on, these acts have been, and are being perpetrated over and over again. It is not merely a coincidence that the government authorities keep turning a blind eye to incitement against the Ahmadis. On nearly every occasion, they are aware of impending trouble because anti-Ahmadi rants are being yelled out from public loudspeakers, yet they allow the build-up and rousal of the mob and stand aloof while properties are attacked and destroyed. The anti-Ahmadi laws and such inaction by the authorities make it apparent that the state is implicit in such destruction.

It is beyond belief that the inhumane anti-Ahmadiyya laws give any citizen of Pakistan the right to tyrannise Ahmadis for their religious beliefs. When you consider this you will see why it did not come as a surprise to me when I learnt that Pakistan has lost the bid to be “re-elected” to the UN Human Rights Council. The fact that astonished me the most was how Pakistan had earned its earlier membership of UN’s top Human Rights body, while maintaining the legislation that so disgracefully sanctions the persecution of Ahmadis and the denial of their basic human rights.

Dr Tayyab Ahmad Mansoor holds a Doctorate in Pharmacy and has authored numerous publications in scientific journals, for which he is also a reviewer. He has an interest in contemporary and scientific issues and been a national youth leader in Portugal. He is currently based in London and can be reached @DrTAMansoor